The following is a how-to edit guide here in the GTA Songs Wiki.

If this is the first Wiki you're starting to contribute on Wikia, we propose to you this editing guide from the Wikia Community Central. You can also see out help desk and see the relevant matter.

The song infobox should be used at the top from the page. There are only 7 sections to be followed.

name = The official name of the song.
image = The official album cover of the song.
size = The size should be always 250px.
game = The game that the song is featured.
radio station = The belonging radio station, remember to link the radio station ([[...]])
artist = The artist, the performer. If the song is performed by more than one producer, you should the following example : Dr. Dre<br>Snoop Dogg. This will produce: Dr. Dre
Snoop Dogg
year = The year that the song was released, remember to insert when the song was released, not recorded.
genre = The genre of the song. 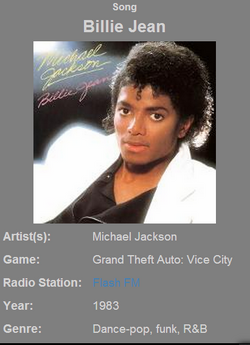 After inserting the infobox introduced above, you'll have to edit the intro, the intro shoud look like this:

Deep Cover (always between the three-three apostrophes) is a song performed by Dr. Dre (1st Note: Always between two-two apostrophes) (2nd Note: If the song features more than one artist, it should look like this: ... is a song performed by Dr. Dre featuring Snoop Dogg) featured in the radio station Radio Los Santos (always link the radio station) in Grand Theft Auto: San Andreas. (official name of the game).

Jumping to the lyrics

To avoid having the lyrics bordering the infoboxes, we recommend adding the template: {{Clr}}, before the Lyrics section. Like the code below:

The video should be the official video about the song on Youtube. If the artist/band doesn't feature any VEVO channel, take the best video about it on Youtube, with the greater quality and highest number of views. You can post the videos using these signs:

To see how categories work and how they should be applied, see Help:Categories.

The following is the method to how categorize pages in the Wiki and make subcategories.

In a song article, two category pages should be added, the order doesn't matter. The first one is the radio station. The radio station category should be named *example* Radio Los Santos, and not Songs in Radio Los Santos. The second category is in which game the song is featured, they look like this: GTA San Andreas songs, GTA Vice City songs and etc., but remember, when you're adding songs related to the episodes from GTA IV (The Lost and Damned and The Ballad of Gay Tony), the dedicated category is GTA IV + Episodes songs and not The Lost and Damned songs. Something very important is too look out at the capitalization (GTA V songs and not GTA V Songs).